On October 15th, Donal will once again play an original set in the Melting Pot, Rostrevor, Co. Down. Other acts on the bill are to be announced soon. This will be his last original gig before heading to North America. Hopefully we'll see you all there.

On the 20th June 2011, Donal signed with independent record label 'Front Shore Records'. The London based label are primarily focused on emerging artists from Ireland and the UK and have said: "We're happy with the move and to have him on board. We think that it'll be very productive for both parties, particularly with the direction his music is now moving in". This has been something Donal has been striving for, for some time now: "I couldn't be happier about it, it's like the next step in my development as an artist and it's an amazing feeling to eventually have someone take an interest in what I'm doing musically". This promises to be exciting times ahead for the artist as it's a move that can only lead to doors opening  in the right directions. For more information check out www.frontshorerecords.com.

Here's a  recent review of Donal's debut album 'In The Spotlight' by the Musician's Union magazine 'Musician' from their Autumn 2011 edition. 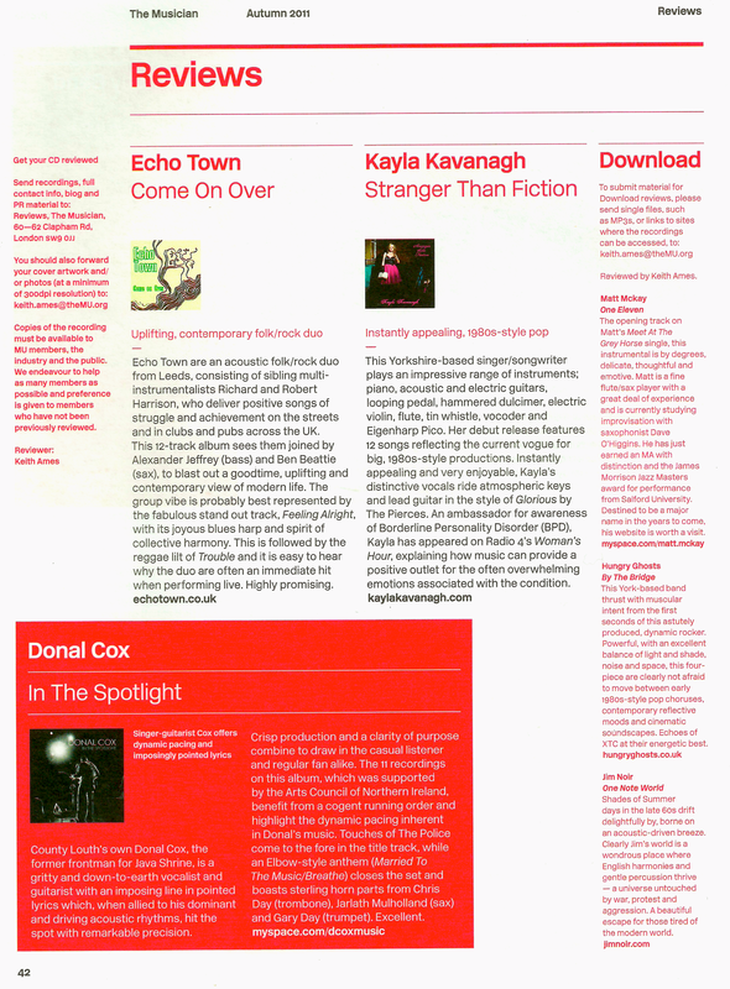 County Louth's own Donal Cox, the former front-man for Java Shrine, is a gritty and down-to-earth vocalist and guitarist with an imposing line in pointed lyrics which, when allied to his dominant and driving acoustic rhythms, hit the spot with remarkable precision. Crisp production and a clarity of purpose combine to draw in the casual listener and regular fan alike. The 11 recordings on this album, which was supported by the Arts Council of Northern Ireland, benefit from a cogent running order and highlight the dynamic pacing inherent in Donal's music. Touches of The Police come to the fore in the title track, while an Elbow - style anthem (Married To The Music/Breathe) closes the set and boasts sterling horn parts from Chris Day (trombone), Jarlath Mulholland (sax) and Gary Day (trumpet). Excellent.

This Review is taken from The Musician's Union Magazine (Musician) from their summer 2005 edition. It is a review of Java Shrine's album 'Nothing To Declare'.

"Reflecting their experiences of traveling the road as a quintet of hopeful and talented musicians, Java Shrine lay down their pleasant and easy going strumming for the world and wait for the layers of subtlety and grace to settle amongst us. They may not rely on bang and bluster to catch our ear, but there is intelligence and taste at work here. Long after misguided empty vessels have blown themselves out, you get the impression these boys will still be charming many with recordings of genuine rapport and skill. Touches of trombone, euphonium and trumpet pop up to shift expectations. Stand out: Goodbye San Francisco."